To kick off this creative blog, I have a monster of a project.  It took a month to complete which I should have expected with four kids.  But I am so happy that it's finally finished! 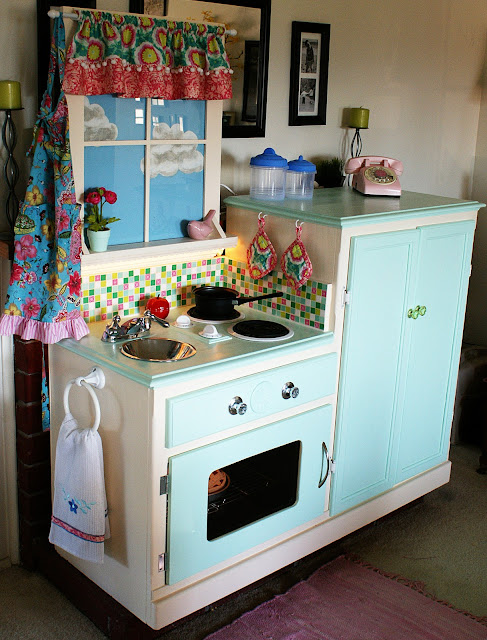 After getting tons of inspiration online (just go here,  here and here for some fun play kitchen eye candy!) and searching craigslist for the perfect piece of furniture, I found this. 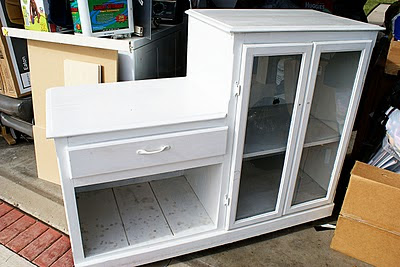 I took one look at it and knew it was meant to be a play kitchen.  The lady I bought it from was so nice.  She sold it to me for $60.  I was so excited!
The hardest part of the entire kitchen redo was cutting out the holes for the sink and burners.  I thought I was going to die.  My jigsaw blade snapped off once (my heart stopped for a second there) and then after a few seconds of cutting, there would be so much friction that the wood would start smoking.  I thought the whole thing would catch on fire.  This is when I find out this thing was solid oak!

When I was down to the last few inches on the last hole and didn't think the jigsaw (and my nerves) could take anymore I just drilled several small holes along the cut line and hammered it out.  I sanded it as much as I could.  It isn't pretty but you don't even see it anyway so who cares? 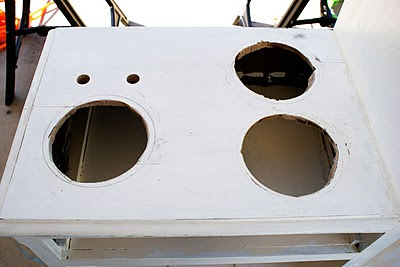 I added some trim here and there and then painted the whole thing. (EDIT: For anyone interested, I used Behr's Seafoam Pearl to paint this kitchen.) The back splash is just a 1 x 6 painted and découpaged with paper squares.  I just so happened to have a square paper punch handy so getting uniform squares was a breeze.  I chose colors that matched the fabrics I had already purchased (the main fabric used for the curtain and hot pads is from Amy Butler's Soul Blossoms collection). 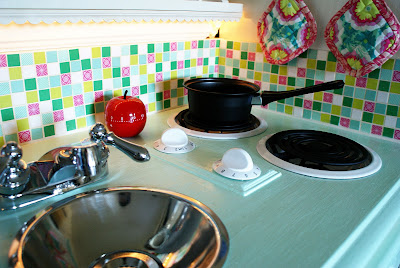 The sink is just a metal bowl from the dollar store with an added sink strainer (also from the dollar store) screwed to the bottom to give it a more "sink like" appearance.  The faucet, burners and knobs were purchased at a recycle center.  The faucet was $5.00, the burners were $1.50 each (including the drip pans) and the knobs were $0.75 a piece.  The burners were spray painted to look newer and the knobs and faucet just needed to be cleaned up. 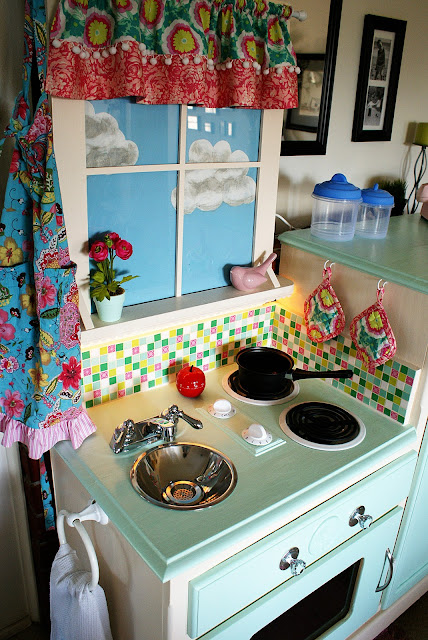 The window was something I already had that my grandpa made for us.  I just sewed the curtain and added little scallop trim underneath the window sill to help hide the lighting.  And speaking of lighting... 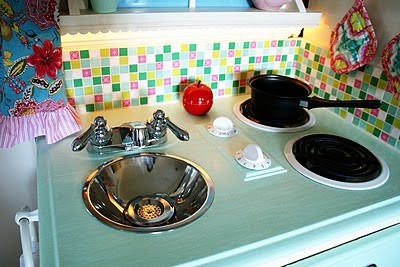 I used rope lighting under the window to create down lighting on the countertop and then had that wrap around to the back and back through into the stove (idea came from my mom).  I coiled it on the stove's ceiling to create a nice light-up effect.  I only wish I could have had an on/off switch for the lighting.  I have to plug and unplug it everytime. (EDIT: A reader suggested using one of those push button on/off switch plug-ins you can buy and around Christmas to plug the lights into. I found one and now can just push that little sucker to turn the lights on and off!) 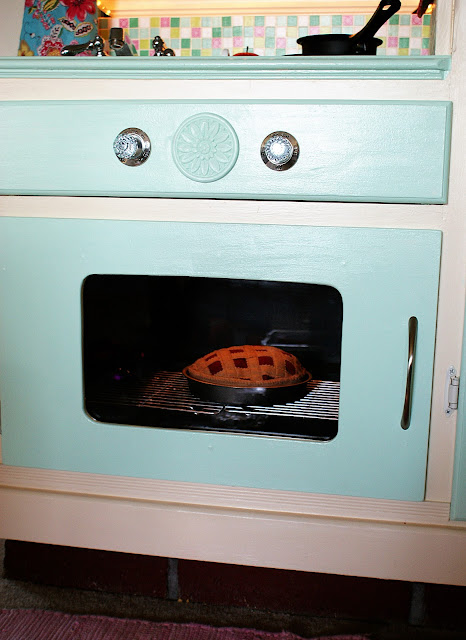 I built a platform for the cookie cooling racks, a.k.a. the oven rack, to sit on.  The oven door is a piece of MDF that I had cut to size.  I cut out the hole myself though with the jigsaw.  I bought a piece of plexi-glass from a local plastic supplier for about $6.00. 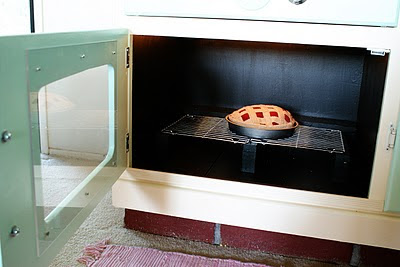 For the oven knobs, I bought some old oven knobs at the same recycle center that I bought the burners, faucet and stove knobs from. I just removed the old yucky knob part and replaced it with a washer and a sparkly $2.00 acrylic knob from Michaels.  Doesn't it look pretty?  Even if you can't twist them, I love how they turned out. 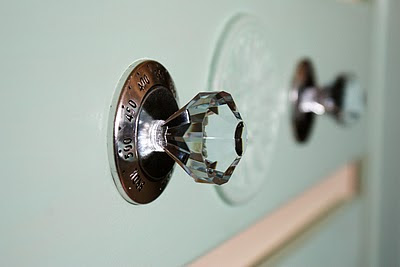 I also picked up a couple more acrylic knobs from Michaels for the cupboard/refrigerator doors but I chose the lime green color for variety. 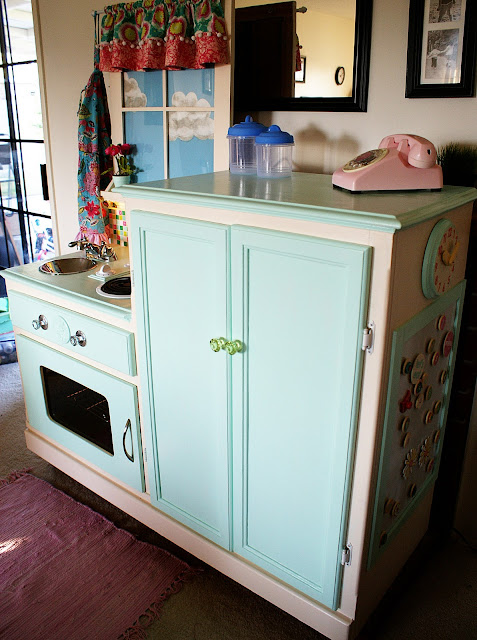 And the cupboard is big enough to hold all the play food, play dishes and any other toys that don't have a home yet. 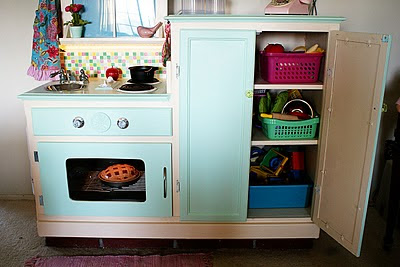 For the side of the kitchen I added a magnetic whiteboard and hand made wooden clock.  I bought a whiteboard but didn't like the plastic frame it came in.  So I took it apart and built my own frame. It's not perfect, but I don't care! 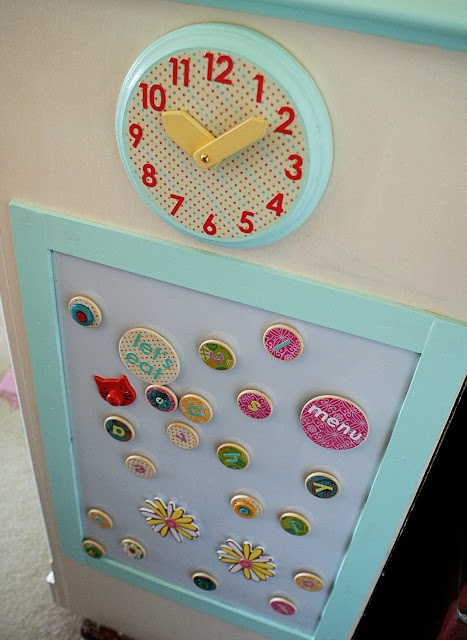 The magnets (except for the kitty one and the flowers) were hand made by me using découpage.  The clock was also découpaged with scrapbook paper and numbers cut out on my cricut.  The clock's hands are movable so the kids can practice telling time!  Pretty and practical!

The whole kitchen sits on our hearth blocking the fireplace we never used anyway.  Oh, and see that cute little apron hanging up on the side?  My mom made that for Shailey for her birthday using a second hand blouse.  She's in the process of setting up her own Etsy shop selling fun things made from second hand clothing.  Keep checking Second Chances by Susan on Etsy because she plans to set up her shop soon! (EDIT: For those wondering about the little pink phone, it actually works... when it's plugged in. It used to be a cream color but I spray painted it pink!) 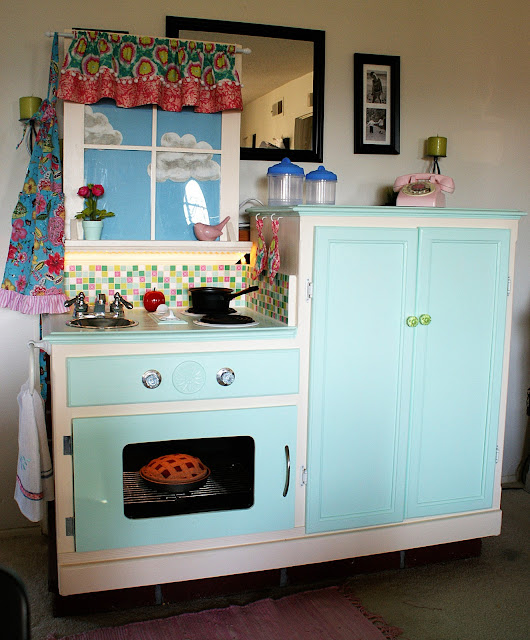 Overall, I am so happy with the way it turned out.  It was worth all the time and effort that went into it.  Thanks to all the wonderful inspiration out there!  Keep making beautiful things and inspiring others to do the same!  Happy crafting!

Email ThisBlogThis!Share to TwitterShare to FacebookShare to Pinterest
Labels: before and after, decoupage, just for kids, play kitchen, sewing, thrift store find

It is absolutely adorable!! I'm so glad you decided to paint the doors and countertop. It really adds a lot. Everything is just perfect. I'll send the plates, shakers, and rolling pin as soon as I get a few more things to fill up the box! Those cute little granddaughters of mine are sure lucky to have a crafty mom and a VERY patient dad!

This is incredible Kim! Awesome Job! I love the magnet board on the side, what a cute added touch.

I love all the details! So adorable. You really do some nice things with furniture.

Wow! I don't know how you even got that done in a month. Very impressive Kim!

What the? Amazing!!! Kim, so beautiful! Love the colors, love the details, love the fabrics, I love that you used real fixtures, genius! One day I want to make one of these, I am so so amazed! Keep up the good work, can't wait to see what more goodies you come up with to share!

This is fantastic! Wow, your kids must love it. It's looks like its going to be a real family heirloom. Amazing!

This is just about the most fabulous kitchen I have seen. You did an awesome job.....we would be the best of friends for sure. I love it!! Your kids are lucky to have you as a mom. Keep crafting and sharing.

Wow! My husband has been talking about making one for our boys, but so far he hasn't even started. I'm going to shame him with this! ;-)

So great!! I plan to make one soon!

By the way, there are extension cords with push buttons attached that you can def find during the holiday season. The one i have is specifically for turning christmas lights off and on easily on the tree. I stockpile them :) That would allow for a way to turn the oven light off/on without having to unplug it.

Love how yours turned out!

I know my way around a jig saw and all, but I am totally in AWE. This is so amazing.... and your kids will make so many memories with this little kitchen. I hope you'll be able to pass it on to THEIR kids.... Just wonderful.... wonderful! I am impressed beyond impressed.

you win ! I've been looking at these for a while and in my book yours is simply the cutest out there :) E in TN

So cute!
Where did you find the clock hands?

The kitchen is adorable :o)
What paint colors did you use? This is one pretty little kitchen. You did an amazing job!!
I love the colors you used and would like to paint my room with them. Thanks for posting this sweet kitchen.

Your kitchen is the most darling one i have seen yet!!! What is the cabinet called that you found? I would love to find one similar!

This is amazing work ! I love it !

I love this! You are so crafty.

Kim, this is the cutest thing I've ever seen! So much better than anything you could buy, and it's an heirloom.

kitchen accessories is very importantand useful for us.

you can place your order cabinets for kitchen in USA and also schaumbrug.